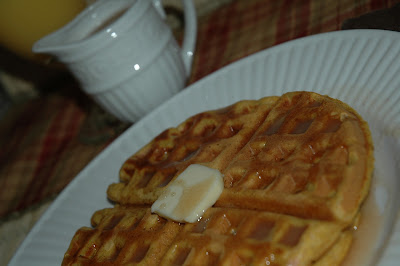 This week is Red Ribbon Week at my kids school...today happened to be "Crazy Hair Day"...I thought, oh, we should get some funky hair color and go CRAZY!  That was such a stupid idea.  I am new with the whole hair color spray stuff, and let me just say...I will never buy that stuff again!  I died their shirts, they rubbed against me and died my clothes, they rubbed their heads against the wall and it is all over the wall, it got all over my car, all over the towel...you get the idea.  I will be cleaning this stuff off of everything all day long!  What a mess!  So, instead of doing that, I am going to blog about these Waffles instead;)

This would be the Third Pumpkin recipe this week!  I have to say that this is one of my FAVORITES!!  Sad to say I have never had Pumpkin Waffles before!  Crazy, I know...My cousin, Jennie, gave this to me and I owe her big time!  Hope you try them!  They would be perfect for Halloween morning...I'm just sayin... 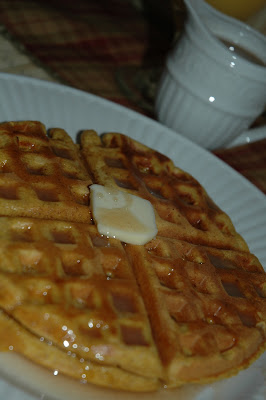 Combine the two groups until batter is smooth.  Spray waffle maker with Pam.  Use 1/2 c. of batter at a time.  Cook for 4 minutes.

Cinnamon Syrup
from: The Sisters Cafe

In a saucepan, combine sugar and cinnamon.  Pour in corn syrup and water and stir to dissolve.  Boil, stirring constantly, 2-3 minutes.  Cool.  Stir in evaporated milk and serve.  Refrigerate leftovers.


Halloween Party
My neighbor, Shannon, was having a Halloween Party and she asked me to help her!  Like I would turn her down!  So we plotted and planned and came up with this cuteness...hope it gives you some ideas for your party! 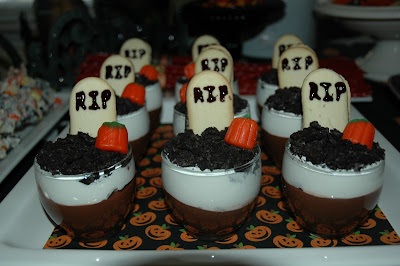 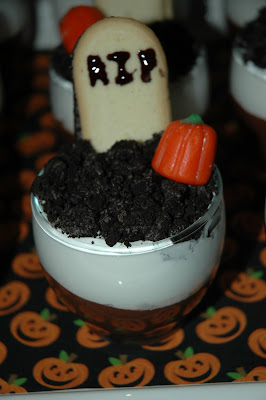 Make Pudding according to directions.  Put in a zip lock baggie, cut the tip off and squirt into little votive candle holders.  Then make your whip cream, or cool whip, and pipe that on top of the pudding.  Crush your Oreos and sprinkle on top of the whipped cream.  Take your black piping gel and write RIP on the Milano Cookies, stick into the pudding cups, add the pumpkin...thats it!

Oh...you can totally add a square of Brownie on the bottom if you want!! 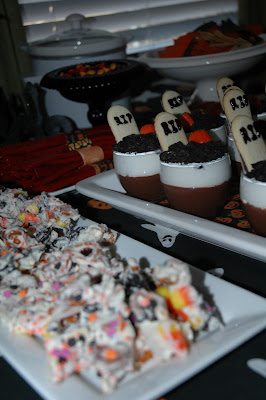 She made some Candy Corn Bark 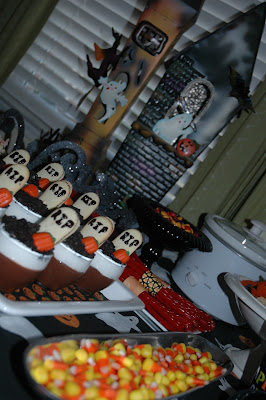 If you look in the corner, you can see some tortilla chips in the shapes of ghosts, pumpkins and bats...so fun! Also had some queso. 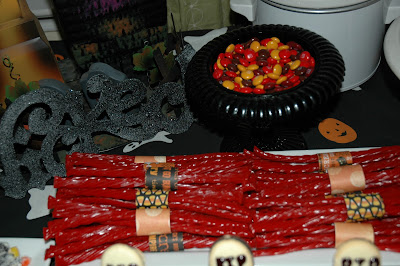 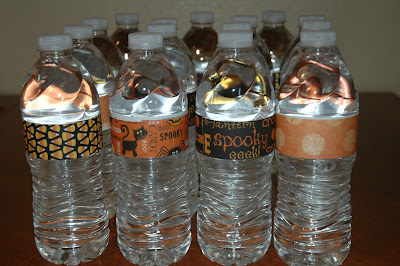 And of course we used the same paper to wrap around some bottles of water.
Posted by Summer at 7:01 AM