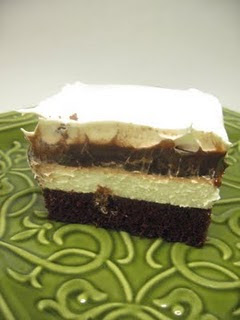 I went to a friends baby shower and this was served there. Of course when I taste something amazing I search for the creator:) My friend Natassia Saterthwaite made this and gave me the recipe. There were several others who wanted it and I said I would post it. So, here it is...

4 Layered Lavish Dessert
Layer 1: Chocolate Cake
1 Devils Food Chocolate Cake Mix
Make according to directions, but pour only half the batter in a 9x13 greased pan. Bake at 350 for 15 minutes. Use the rest of the batter to make cupcakes;)
Layer 2: Cream Cheese Filling
8 oz. cream cheese
1 c. powdered sugar
8 oz. cool whip
Mix cream cheese and powdered sugar together until combined. Fold in cool whip until combined. Put on top of chocolate cake once it has cooled.
Layer 3: Pudding Filling
2 small boxes INSTANT chocolate pudding
3 c. milk
Whisk the pudding and milk for 2 minutes and then pour on top of the cream cheese filling.
Layer 4: Cool Whip
8 oz. Cool Whip**
Put cool whip on top of the pudding...if you want to get fancy, top that off with some chocolate shavings.
**Buy the big Cool Whip and split it up between the Cream Cheese Layer and the 4th Layer.
Posted by Summer at 7:08 PM